Deploying a ‘Hello World’ application to the Cloud Platform 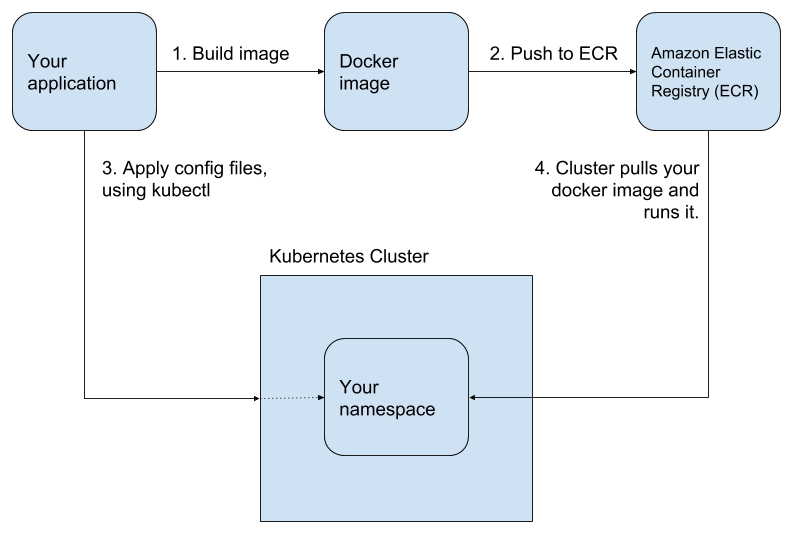 The aim of this guide is to walkthrough the process of deploying an application into the Cloud Platform.

Before working through this tutorial, we recommend reading this Cloud Platform tech overview page, which provides a high-level view of the software development lifecycle on the cloud platform.

This guide uses a pre-configured “Hello World” application as an example of how to deploy your own. This application merely returns a static HTML response, and has no dependencies. Later examples will use more representative applications.

We will walk through these steps:

Then we will demonstrate a typical software development cycle of making and deploying changes to the application:

The process of building an image and pushing it to an ECR will normally be carried out an application’s build pipeline. However, for this initial walkthrough, we will go through these steps manually. Later we will go through an example of setting up a CircleCI job to do this automatically. The steps are similar if you’re using other CI/CD tools such as TravisCI.

This guide assumes the following:

Follow this guide to create a namespace on the Cloud Platform (you don’t need to do any of the “Next steps” from that guide).

Before we can deploy the application, we need to make some changes to run it in your new namespace.

We need a unique domain name for this instance of the application. There is a “wildcard” domain and SSL certificate available on the Cloud Platform, so we will stick to a domain name which matches:

Choose a domain name for your application.

We suggest something nobody else is likely to be using, such as:

Replace the two instances of helloworld-rubyapp in the kubectl_deploy/ingress.yaml file with your chosen name.

If you want to use a domain name which doesn’t match the default wildcard domain, you will need to make some more changes. More information on this is available here.

Once you have saved your changes to the kubectl_deploy/ingress.yaml file, you can deploy the application using this command:

This assumes that your current working directory is the root of your copy of the helloworld application repository.

You can think of this command as meaning:

“Hey, kubernetes. Please apply all the YAML files in the kubectl_deploy directory to the namespace called my-namespace (or whatever you called it).”

A few seconds later, you should be able to visit:

…in your web browser, and see the “Hello, World!” message.

This is how the YAML files link together:

You can find more deployment config info in the kubernetes developer documentation.

(Note - Please change the ingress-name and namespace-name values in the above example. The colour should be green for ingress in EKS live cluster)

This tells the cluster that our ingress should accept web traffic to the hostname we defined, and should route that traffic to port 4567 of the “service” called rubyapp-service.

This defines the service called rubyapp-service which listens on port 4567 and forwards web traffic to port 4567 of any pods whose app label is helloworld-rubyapp.

This creates a single instance (replicas: 1) of a docker container based on the docker image ministryofjustice/cloud-platform-helloworld-ruby:1.1 (pulled from https://hub.docker.com, since no other source is mentioned), which listens on port 4567, and has the app label helloworld-rubyapp.

To update our application, we need to:

Everything but the first step would usually be done automatically by your application’s CI/CD pipeline, but we’re doing it manually here for ease of understanding.

Our initial deployment of the Hello World application pulls a docker image from Docker Hub - a public docker image repository.

Most projects hosted on the Cloud Platform use Amazon ECR - a service providing private docker image repositories, only accessible by a single team. So, we’re going to use an ECR to store our updated docker image.

Please follow this guide to create an ECR for your namespace.

Edit the app.rb file, and change “Hello, World!” to something else.

Now that we have updated the source code, we can build a new docker image (locally).

You can replace myimage with any name you like for your new docker image. Don’t forget the . at the end of the command.

Authenticating to your docker image repository

Before you can push the image to your ECR, you need to authenticate to it.

To authenticate to your ECR, you will need the access_key_id and secret_access_key which were created for you when you created your ECR. To retrieve these, see the this section of this guide.

tl;dr use this command:

Once you have your access_key_id and secret_access_key, set up an AWS profile using the AWS cli tool.

You can call the profile anything you want.

Supply your credentials when prompted. For region, enter eu-west-2 This is London, which is the region all cloud platform resources are in.

When prompted for Default output format [None]:, just press enter.

Now, tell the aws command-line tool to use these credentials by running:

Where [profile name] is whatever you entered for --profile in the aws configure command.

Login to the repository

The command to login to Amazon ECR is slightly different, depending on your version of the aws command-line tool. You can find this out by running:

For AWS version 1.x use the following command to login to Amazon ECR

The output of the aws ecr... command is a long docker login... command. Including the $(...) around the command executes this output in the context of the current shell

For AWS version 2.0, use this command:

For either version of the aws cli, the output of the above should include Login Succeeded to confirm you have authenticated to the docker image repository.

These credential are valid for 12 hours. So, if you are working through this example over a longer period (e.g. the following day), you will have to login again.

Tag the image and push it to your ECR

If you base64 decode the repo_url of the ECR secret in your namespace, you should get a value something like this:

We need to tag our docker image with that URL in order to push it to our ECR.

So, you can only push an image whose name matches your ECR’s repo_url value. You are free to change the tag of the image, and some teams overload the tag value as a way to store multiple completely different docker images in a single ECR.

Replace myimage with whatever you chose in the docker build command, and use the repo_url value from your namespace secret.

Now we can push the image to your ECR:

Now that we have a new docker image with our updated software, we can deploy it.

Edit your kubectl_deploy/deployment.yaml and change the image from ministryofjustice/cloud-platform-helloworld-ruby:1.1 to the same value you used in the docker push command above.

After saving your changes, apply them to the cluster by repeating the kubectl apply command:

This will cause kubernetes to launch a new pod using the new docker image, and then delete the old one. In a few seconds, you should see your updated web page.

The application can be accessed from the internet at:

As per the guidance for domain names, our application should have some authentication to prevent citizens accidentally mistaking development websites for live government services. Whilst this isn’t much of a problem with a ‘hello world’ site, it could be an issue for sites using the GDS prototype kit, which look exactly like live services. So, let’s add http basic authentication to our application.

We can do this by amending our Ingress, which is the kubernetes object that routes traffic to our application from the internet. We’ll create an encrypted username and password, and then store that in a kubernetes secret. Then, we will update our Ingress to use basic authentication, and tell it where to find the credentials.

First we’ll use the htpasswd program to create a one-way hashed username and password. htpasswd is a system program which should be pre-installed on your computer.

To create a username ‘bob’ with password ‘password123’ in a file called ‘auth’, run the following command:

Whatever value you use for your password (which should not be ‘password123’ be sure to make a note of it now - it will not be visible again.

Kubernetes secrets are stored as base64-encoded text strings, so we need to run the ‘auth’ file through base64 (which should also be pre-installed):

This will output the string we need to store in our secret. For the purpose of this tutorial, I’m going to use Ym9iOiRhcHIxJFVXQ1cxWDlvJGt3WDdoMTFZemNYdmVseHE2UFV2VzAK Please substitute the value you got from the step above, using your own choice of username and password.

You can now delete the ‘auth’ file - we don’t need it anymore.

The next time we apply our yaml files to our namespace, this file will create a kubernetes secret called ‘basic-auth’. Now we need to configure our Ingress to use it.

To configure our ingress to use basic authentication, we just need to add a couple of lines to the metadata section of kubectl_deploy/ingress.yaml

This tells the Ingress what kind of authentication to use, and which kubernetes secret contains the credentials.

All that remains is to apply our updated yaml files in exactly the same way as we did before, when we deployed the application:

Now, if you reload the browser page showing the ‘Hello world’ message from the application, you will be prompted to enter the username and password.